Ambient devices are a new genre of consumer electronics characterized by their ability to be perceived at-a-glance (also called "glanceable"). Ambient devices utilize pre-attentive processing to display information: the ability for the brain to perceive information without any apparent cognitive load. Initial research on ambient devices began at Xerox Parc with a paper co-written by Mark Weiser and John Seely Brown entitled Calm Computing. Associated fields include Ubiquitous computing (also known as Ubicomp) and Calm technology.

The New York Times Magazine announced ambient devices as one of the Ideas of the Year in 2002 on the heels of a start-up company, Ambient Devices, releasing their first product Ambient Orb, a frosted-glass ball lamp which maps information to a linear color spectrum and displays the trend in the data. Other products in the ambient genre have since been produced, such as the wifi-enabled 2008 Chumby, and in October 2012 the more sophisticated, 52-LED device MooresCloud (a reference to Moore's Law) from Australia. [source: wikipedia]

ORBneXt is an always-on, realtime desktop data display device. It connects to your home or work internet via Wi-Fi and allows you to track a virtually endless array of information. ORBneXt allows you to visualize important information with colors providing instant knowledge at a glance.  For example:

Luma is a smart lamp for the 21st century. Charge your device, listen to music, make a call and set the mood all with this smart lamp controlled by your phone.
https://www.kickstarter.com/projects/588318042/luma-a-smartlamp-for-the-21st-century

ThingM's blink(1) is a small USB light to give you glanceable notice of anything on your computer or the internet. It packs three dimensions of information (color, brightness, and pattern) into a single tiny package that fits into any USB port on nearly every device. 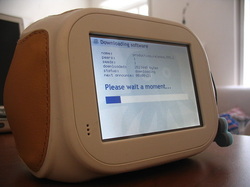 Chumby is a consumer electronics product formerly made by Chumby Industries, Inc. It is an embedded computer which provides Internet and LAN access via a Wi-Fi connection. Through this connection, the Chumby runs various software widgets.  Roughly resembling a small clock radio, it consists of a small touch-screen with a leather and plastic exterior. It uses AC power and turns off if unplugged; a 9 volt battery connector is supplied for backup power. It comes in six colors. [source: wikipedia]